With the Winter Olympics taking place throughout February, I thought I would share what it’s like to be an Olympian during a pandemic, and the how important community support is. Thanks for reading along and joining me on my journey to the 2024 Paris Olympic Games!

I hope you and your family had a wonderful holiday season and are looking forward to what 2023 is going to bring, I know I am. For myself, this is the year that Rowing Canada can qualify boats for the Paris Olympics in 2024. But before we get into that… let’s talk about last year!

Last year was an exciting year full of personal development and new challenges. After deciding to return to rowing after the Tokyo Games, my Olympic doubles partner underwent double hip surgery (more about that later), which meant I was on my own for the foreseeable future.

I started off the year successfully and was named to the World Cup team after winning the Spring Speed Orders. I was given the opportunity to decide what I wanted my summer to look like: I could race both World Cups alone in the single, or race one in the single and try the double with a new partner for the latter World Cup. For me it was an easy decision; I love racing my single, but I love working with someone else more. This meant that my partner, Karissa, would experience her first senior World Cup tour. I relished the opportunity to test myself in a new position and to help someone else achieve their rowing goals.

At our World Cup in Poland, I narrowly missed out on the podium in the single placing 4th. I was really proud of the racing I had and where I was given my break after Tokyo. After some pierogies, it was off to Italy for a training camp before our final World Cup in Switzerland. 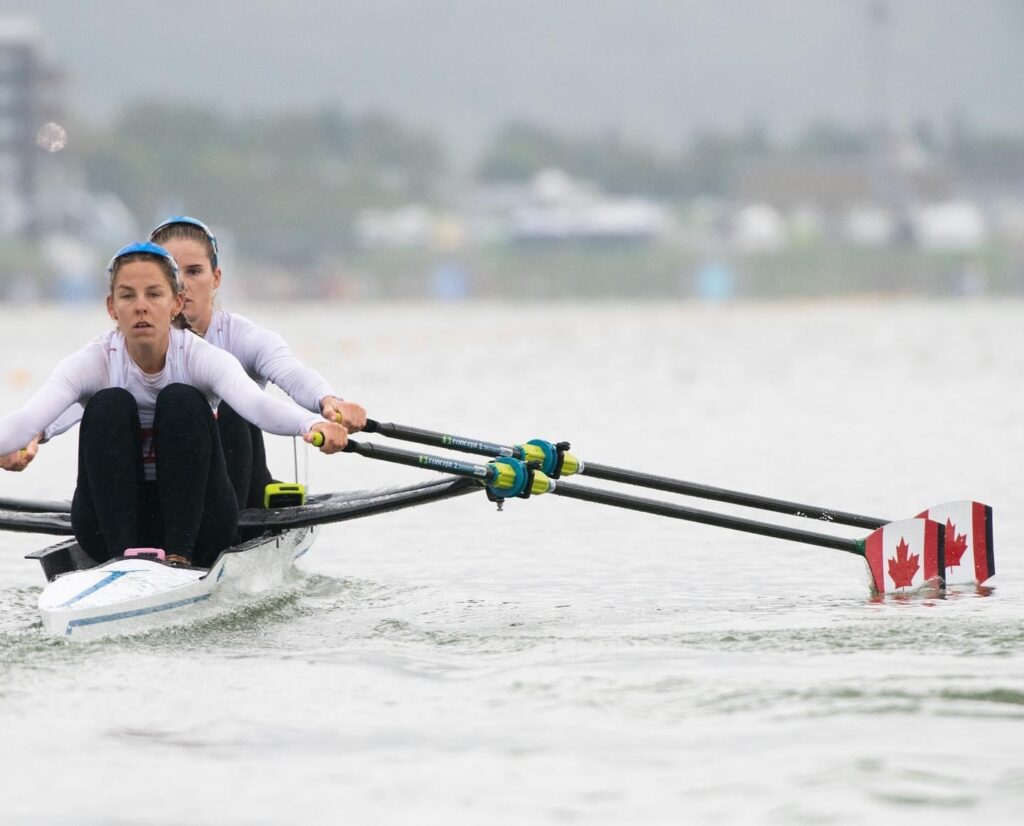 My new partnership was off to a great start and it was really fun being in a mentorship position and watching Karissa experience rowing at this level. We had a great camp and put together some fierce racing in Switzerland, placing 7th. Karissa did great on her first senior team, and only being 21! I loved the challenge of the new combination and how it forced me to take on a leadership role.

After our World Cup Tour we returned to the Island to train before the World Rowing Championships in September. My Tokyo Olympic partner, Jenny, was back rowing after successfully recovering from surgery and quickly getting back into top shape.

We were named to the World Championship team with a month to get ready and compete. It went by quickly and soon enough we were in Munich, training at the site of the 1972 Olympics. During our training camp our team visited the Dachau Concentration Camp, the first that Nazi Germany built. Although a seemingly odd excursion during an intense training camp, it put into perspective how lucky we are to be able to chase our dreams. It was a harrowing reminder that our freedom came at a cost, and is very much worth protecting.

When it was finally time to race, we had a great regatta. After placing a disappointing 12th at the Tokyo Games, our goal was to have fun, stay clear in our minds, and race our hearts out. Before we went out on the first day, we believed it was our chance to move on from the past and write a new story. We came 7th, leading our B final from start to finish. I was proud of myself, and how hard Jenny worked to come back from surgery. I left the regatta more motivated than ever, but first I enjoyed our time off by touring the Czech Republic and Austria with some of my Rowing Canada teammates. We made some great memories, tried lots of yummy food, and took our minds off training.

Since the World Rowing Championships, I won our National Rowing Championships in November and began volunteering at the VOICEINSPORT Foundation as their Director of Research and Policy. Voice in Sport is a charity that funds innovative sport science research that focuses on women and girls – making it my dream job! It’s been so wonderful to be able to volunteer my time and effort to a charity that is making a direct contribution to women and girls in sport. I’ll be volunteering remotely with them when I’m not training on the water, I love being able to turn my brain off from rowing for a few hours and engage in a different space.

As I mentioned, 2023 is a big year for rowing. It’s the year that you can qualify for the Olympics. For my event, only seven boats qualify this year. Securing a top seven ranking ensures that Canada will be represented in Paris. This will happen in September in Serbia, following another World Cup Tour.

My goals are set high for 2023. With Olympic qualification and my New Years resolution of having the same biceps as Michelle Obama and reading a book per month, I have my hands full! I look forward to bringing Big Wheel Burger and you along for the journey, showing you what it’s like to prepare for an Olympic Games.

My name is Jill Moffatt and I am an Olympic rower living in Shawnigan Lake, B.C. Big Wheel Burger is supporting me on my path to the Olympics and in exchange I’ll be sharing parts of that journey with you! Follow along each month for behind the scenes stories and other things outside of rowing that I am passionate about. This month I wanted to give an update on my 2022 season and what is coming up this year.Thanks for reading along and joining me on my journey to the 2024 Paris Olympic Games!

« Where’s The Beef? Breaking Down Burger Prices
All Posts