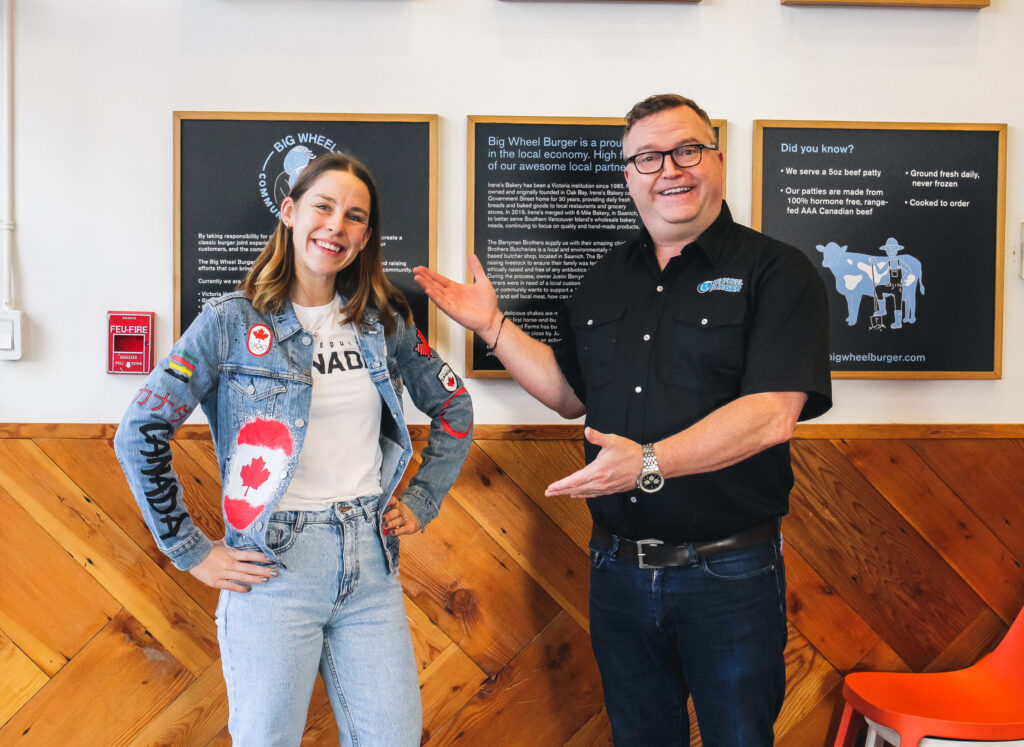 My name is Jill Moffatt and I am an Olympic rower living in Victoria, B.C. This is my first blog for Big Wheel Burger so I want to introduce myself, share a bit about my Olympic journey, and what is next for me. Big Wheel Burger is supporting me on my path to the Olympics and in exchange I’ll be sharing parts of that journey with you! Follow along each month for behind the scenes stories and other things outside of rowing that I am passionate about. Thanks for reading along and joining me on my journey to the 2024 Paris Olympic Games!

I’m originally from Ontario, but please don’t hold it against me! I am from a small town outside of Peterborough, called Bethany. My mom is a nurse, and my dad worked for General Motors, and later on UNIFOR. My little sister, Erin, now works in Calgary as an environmental consultant, and I am convinced she got the better athletic genes from my parents.

Growing up I really did every sport imaginable. Figure skating, soccer, volleyball, diving, swimming, running – you name it, I tried it. Eventually I settled on the cross country and track and field teams in high school, with a brief stint on the swimming team between seasons. I loved being a part of a team and the friends that came from it. I was good, but never the top athlete by any means, I just was there because I enjoyed it. So, when I graduated high school, I thought that was the end of my athletic career in terms of competing with a team. I was so excited to go to a big university and begin that part of my life.

In 2011, I started school at Western University in London, Ontario. My plans to enjoy sports on my own time was quickly forgotten when I found myself trying out for the school’s novice rowing team (for people with no rowing experience, UVic has one if you’re interested!). I quickly fell in love with the sport and made it my goal to continue with the varsity rowing team.  For the years that followed, I became a provincial and national champion, and with the support of my university coaches, competed at the Canada Summer Games and U23 World Championships for Team Canada.

I graduated in 2016 with a BSc in Health Sciences, with a minor in Political Science. I really loved the courses I was taking, so I began a Masters in Health Information Science at Western in the fall of 2016. It was at this time that I was invited to train with the senior national rowing team, which was training out of London. For me, I was one of those athletes who never really had the goal of competing at the Olympics, I just truly enjoyed rowing and took the opportunities as they came. I decided to join the team and take it one step at a time.

As I did my masters and trained with the senior team, I began making World Cup tours and racing at the World Championships. In 2017, it was decided that the women’s team would join the men’s team and begin training out of Victoria. This was a shock for me as I was still completing my masters at Western– but it was so exciting because my partner, Dave, was a rower with the men’s senior team in Victoria so it meant we could finally live together!

I made the move to Victoria in January of 2018 and began to complete my masters from afar. Moving to Victoria was amazing -I immediately fell in love with the Island and all it has to offer. Also, no more snow which was such a bonus! As the years went by and I got faster, it started to become a reality for me that I was really training for the Olympics and this was something that was possible.

Training for the Olympics 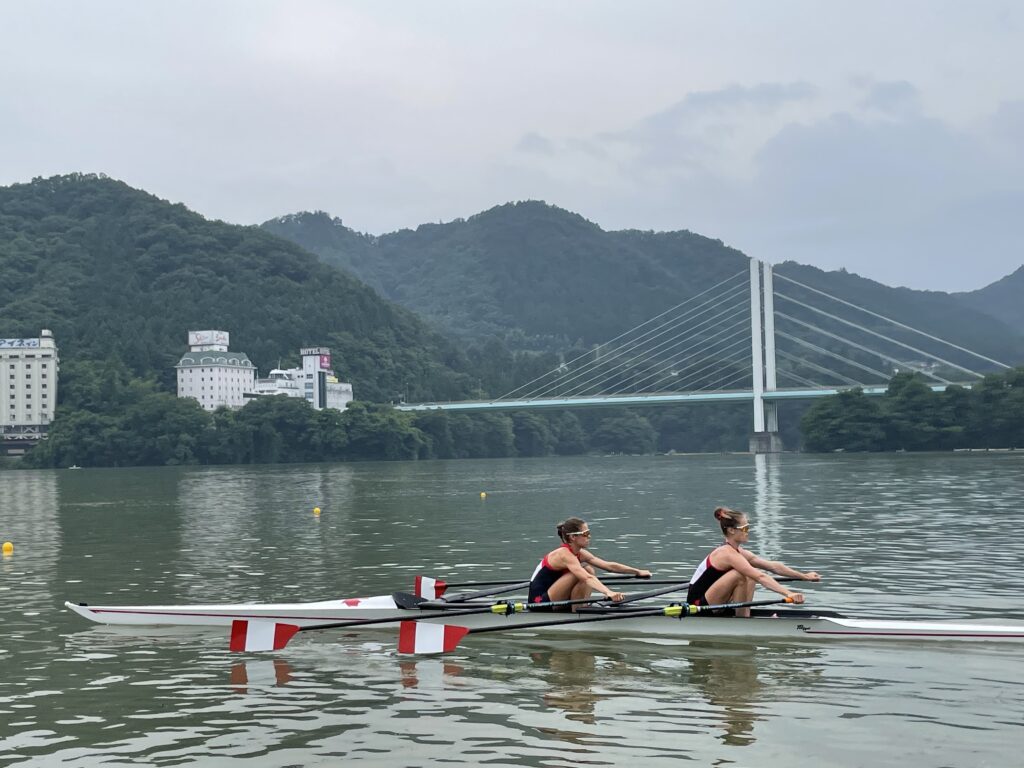 At the time it all seemed straightforward, qualify the boat for the Olympics, and then earn a spot in the boat. During our qualification for the Olympics, my rowing partner and I were actually one spot away from qualification. We had to come top 7 at the World Championships, and we place 8th. This was disappointing of course, but we knew we had what it takes to qualify and the passion to do so. We quickly wiped away our tears and moved forward.

Then covid hit. We were planning to go to another qualifier in Europe and our entire world got flipped upside down. Canada announced we wouldn’t be going to the Olympics, the Olympics got postponed and Rowing Canada shut down operations. As we were on the Island, we were extremely lucky. We began exploring the Island (following rules of course) on our road bikes and began different forms of training. Although the pandemic was challenging as athletes, it gave us another year to get fitter. When we came back in the fall, I was the fittest I had ever been.

Fast forward to April 2021, and we were getting ready to go to our qualifier in May when we found we moved up in international ranking because another boat had an injury and pulled out of the Games. It took the weight of the worlds off our shoulders, as we were preparing to fly Europe, unvaccinated, and race. The risks were high for that time in the pandemic, and this news meant we a) qualified for the Tokyo!! And b) meant we would be able to stay on the Island and train safely. 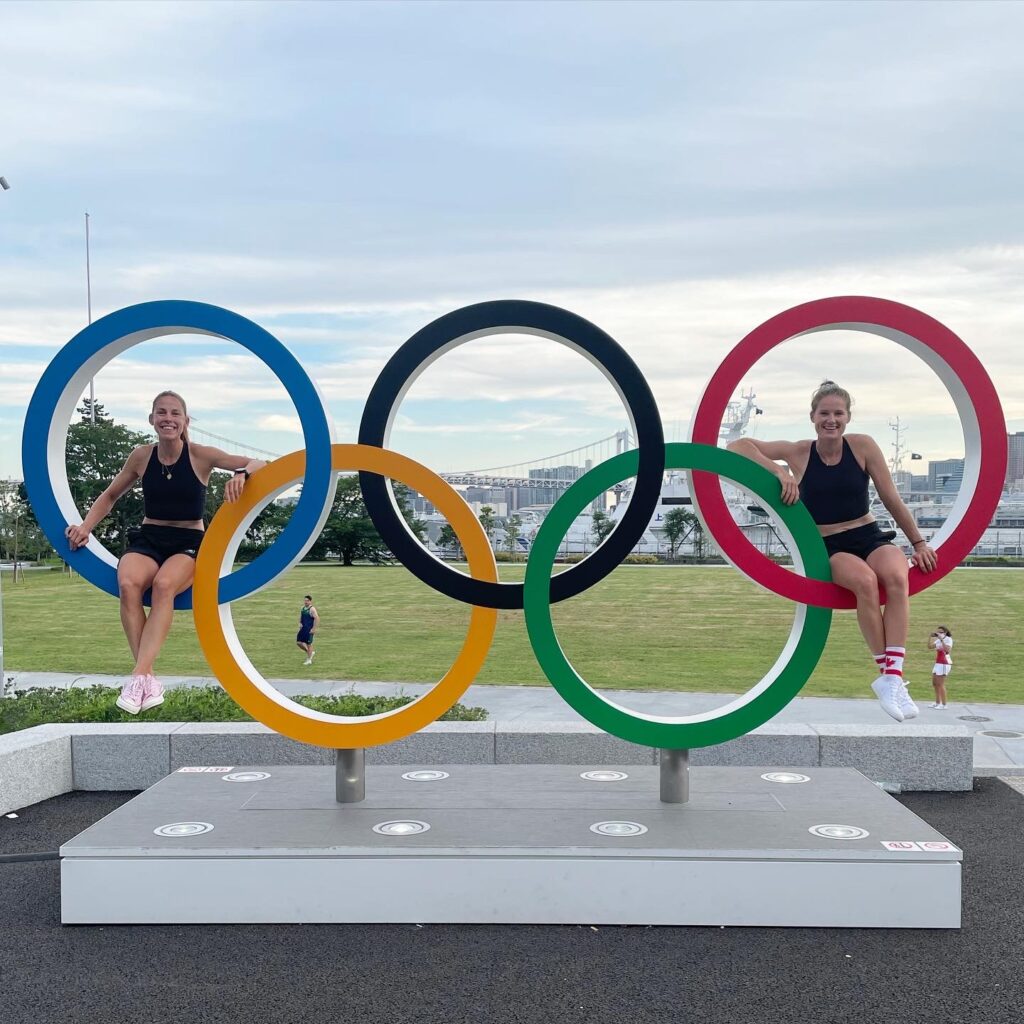 Going to the Olympics was everything I had ever dreamed of and more. It was truly amazing. We spent 2 weeks in Japan at a training site before the Games, and it was like out of a movie. It was my first time in Japan everyone was so incredibly kind, and it was extremely beautiful. It was as if we were transported into a rainforest with a perfect rowing lake – that flowed out of Mount Fuji!

When we got to the Games, it was amazing. Even though it was the ‘pandemic Olympics’, the village lived up to my imagination and then some. Each building was decorated with flags from the countries that were living there, the dining hall was two stories high and provided every kind of food you could ever imagine, and it was surreal to walk around in the evening and see athletes from all over the world in all shapes and sizes. It was well worth the wait.

Our racing began quickly after we got into the village, and that’s when we realized we were in a bit of trouble. My rowing partner and I were struggling to click and find our groove. Maybe it was the pressure of racing again, the gravity of the Olympics, I’m not quite sure, but it just felt like we couldn’t string together performances we were proud of. We ended up in 12th, which was far off our goal in competing for a medal.

Leaving the Games, it was this very odd feeling. I was disappointed, yet proud of myself, I felt like I had let people down, but I also felt like I did my best given how it was going. It was truly a mix of emotions. I came home and tried to decipher what had just happened. 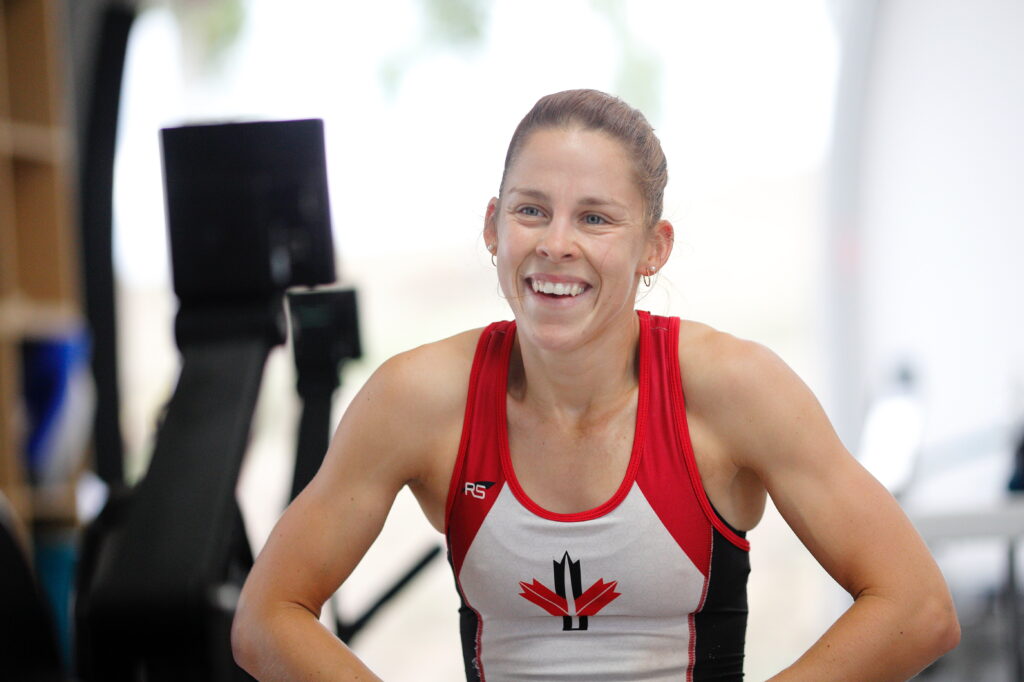 Coming home was the best thing I could’ve done. I hadn’t seen my parents since Christmas of 2019, and when I saw them, I realized it didn’t matter if I was 1st or 20th. I quickly got a reality check of what becoming an Olympian means. As I’m from such a small town, all the surround communities really rallied behind me. They were so proud of me, and it was such a heartwarming feeling. I realized becoming an Olympian meant something special to my family and my community, regardless of my result.

Now, about 5 months later, I am ready to chase my Olympic dream again. Before the Games I was unsure if I would retire or not, I went in with an open mind and no decisions set in stone.  After having a healthy break from rowing and riding the emotional roller coaster that followed the games, I now know that I am not ready to hang up the oars.

The next Olympics is less than 3 years away, and there is a desire within me to see what I can accomplish in these years. I still love the sport and I am very fortunate to be in good health. It really is a once in a lifetime experience to fully chase a dream like this, and I don’t think I can walk away from that quite yet.

I am currently back in Victoria where I have begun training and I am back in school pursuing a Fellowship in Global Journalism at the Dalla Lana School of Public Health. Starting January, you can find me out on Elk Lake training with the team again. It’s my goal to be back on the World Cup Tour this summer and race at the World Championships in September! A small step forward on my path to Paris. I am so thankful to have Big Wheel Burger supporting me dreams, and I can’t wait to share it with all of you.

Ps- my secret order tip is the chicken burger but with franks hot sauce… I promise you will not be disappointed!

« Clearing the Air: Composting at Big Wheel
All Posts
A Peek Into An Olympian’s Diet With Jill Moffatt »